Vieux Carré is owned by the Minneapolis Dakota co-owners, Lowell Pickett and Richard Erickson. Starting in 1985, Pickett originally operated the Dakota in St. Paul’s Bandana Square, before partnering with Richard Erickson and relocating to the current location on Nicollet Mall. A loyal group of music and culinary arts lovers dedicate their time to creating the exciting atmosphere that is the Dakota.  Today that group has expanded to include the team on the East side of the river. The dedication to celebrating life and it’s pleasures by delivering well crafted cocktails and cuisine along with highlighting the wealth of local musical talent on stage continues in the small underground space . Vieux Carré offers a seasonal menu of creole inspired plates and craft cocktails, while blending all genres of local music to create a “speakeasy” vibe. For those who sparkle when twilight beckons, we eagerly await you. 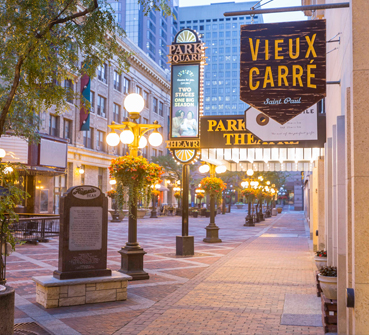 The Artists’ Quarter (a.k.a. the AQ) was a well-known, musician-owned and operated jazz club in the Twin Cities. The club opened in the early 1970s in Minneapolis, Minnesota at 26th street and Nicollet Avenue south. After the original club closed in 1990, drummer Kenny Horst opened a new location at the corner of Fifth and Jackson streets in Saint Paul, Minnesota in 1995. The club moved to the basement of the historic Hamm Building in downtown St. Paul in 2001. 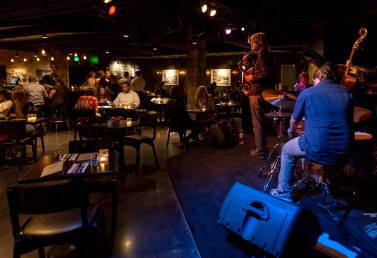 The underground dim locale and historic environment lends to the speakeasy essence. And that's what it is. Simply an underground bar with cocktails, food and local music and passion. Lots and lots of passion.

The magic is that we will be creating a grassroots, seasonal as possible, minimalistic, vibrant, rich feeling in a space that isn't a traditional kitchen.

We’re excited to bring music back to this historic room, and we’re looking forward to being part of the growing vitality of downtown St. Paul.